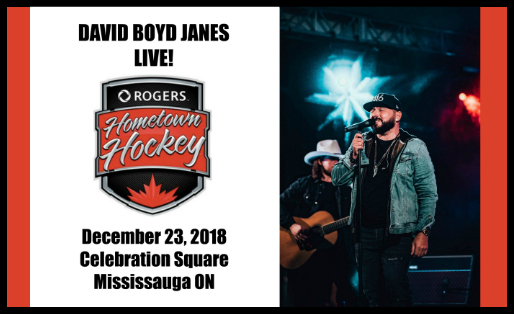 On Sunday December 23, 2018, David Boyd Janes will be taking the stage for the Rogers Hometown Hockey Event in Mississauga, Ontario.

Opening for the legendary Jim Cuddy, the Free Concert will run twice starting at 12PM. Rogers Hometown Hockey is a free event that celebrates all things hockey featuring two days of live entertainment, appearances by NHL alumni, local celebrities and all ages hockey themed activities. There will be an outdoor viewing party of the Toronto Maple Leafs vs. Detroit Red Wings game. This national NHL game will broadcast live with hosts Ron MacLean and Tara Slone (Sportsnet).

“When I first found out I was opening for Jim Cuddy I was at a loss for words”, says David Boyd Janes. “Less than 2 years ago, I was at a City and Colour concert with opening act Blue Rodeo. At that time, I didn’t even have a band. If you told me that in two years I’d be where I am today, with only weeks away from opening for the same Canadian Icon Jim Cuddy, I would tell you that you were crazy”.

Toronto born and raised David Boyd Janes discovered his love for music at a young age. After performing “Ice Ice Baby” at his Middle School Talent Show which resulted in a full auditorium erupting with excitement, David knew he had found his true passion. He started his solo career in the country music industry in September of 2017 and travelled to Nashville with his band and producer in February 2018. He returned with his debut 7 song EP “Thoughts Become Things”.

“Music is life in Nashville,” says David, “there’s a vibe and feeling that you just can’t explain until you touch down and walk off the plane. Studio B, The Grand Ole Opry, Ryman Theatre, Broadway, it’s all just so magical. The talent down there is absolutely unreal! You leave feeling like you just need to lock yourself in your room and practice, practice, practice.”

David’s first single, “Summertime Feeling” broke the Top 100 on Canadian Country Radio in only its first 3 weeks of being released. It is currently being played internationally on SiriusXM and on various stations across Canada. His second single, “I Ain’t Sticking Around” was released in early September 2018 and is currently being played on mainstream country radio across Canada.

“This past summer I played a show at “Rock The Coliseum” in Mississauga, ON. The small theatre style venue is located on the grounds of Celebration Square and I recall walking past the massive stage that I will now be performing on and thinking, “I can’t wait until the day I set foot on something like that”.

Now only 6 months later, David is about to walk out on that exact same stage. “Thoughts Become Things,” says David. “I can’t wait to hear my name be introduced and walk out to perform and do what I love to do for the crowd. I can’t think of a better way to close the 2018 year.”

“I have tons of brand new songs that I can’t wait for my fans to hear! While in Nashville I was working with some amazing songwriters such as Jimmy Thow, Jason Matthews and Josh Wolfe. The band and I will be working hard over the winter to bring a fun exciting concert line up in the summer.”

In the coming weeks leading up to the main event, you can follow David on Facebook, Instagram, and his website for the chance to win a Meet and Greet Experience with David Boyd Janes on the day of his show.